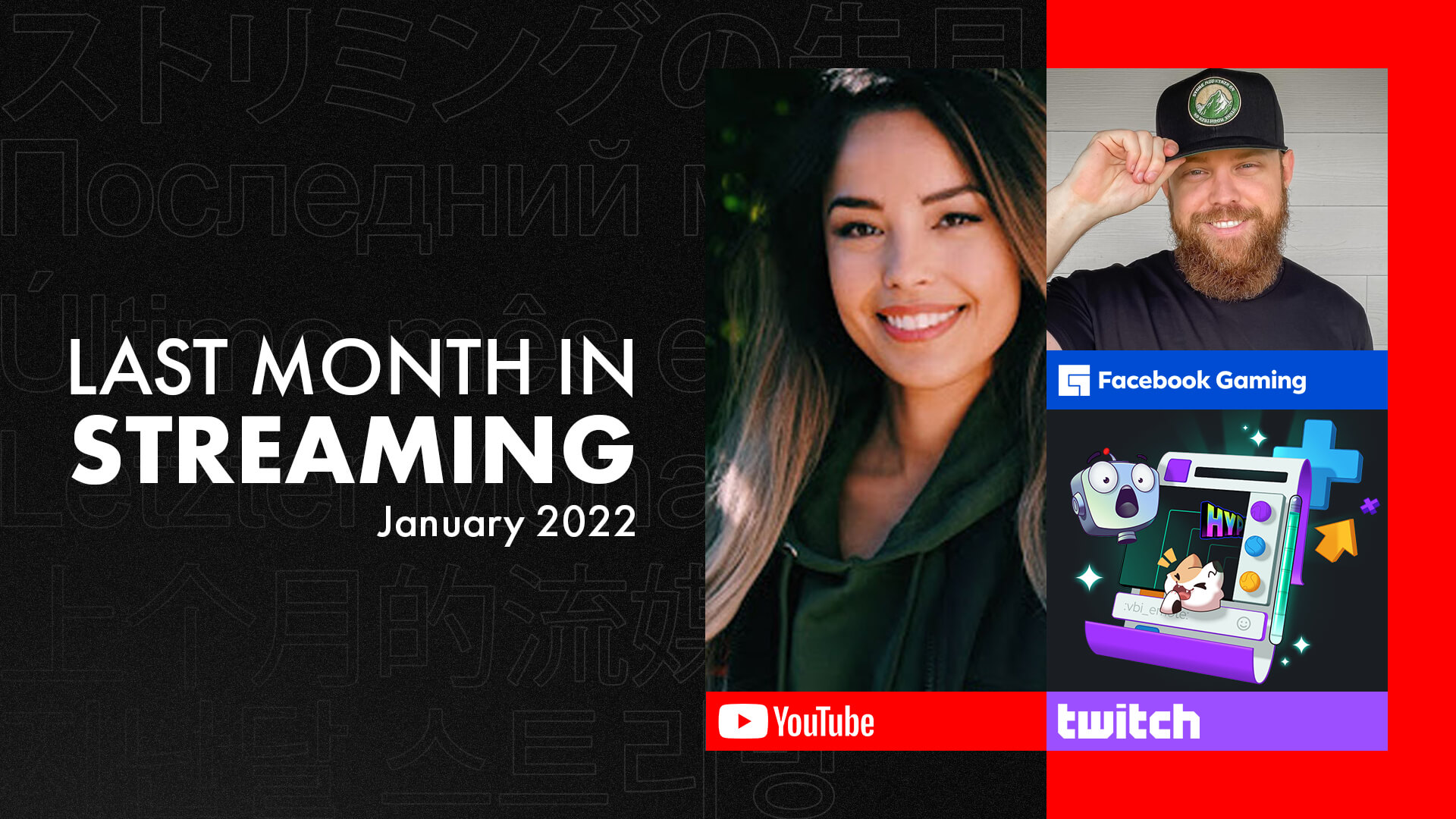 Every month we recap the latest in the Platform Wars, covering:

What changed this past January, 2022? Let’s dive into it.

We teamed up with live streaming aggregator Stream Hatchet to bring you the best platform data available. To analyze viewership, we focus on two key metrics: hours watched and average concurrent viewers (CCV).

Feature-wise, it was a quiet month for all three platforms. Twitch focused on emote rollouts, while Facebook Gaming made much-needed changes to clipping. Meanwhile, YouTube’s beloved leader, Fwiz, stepped down — a massive blow for creators. Finally, top creators Valkyrae and StoneMountain made massive decisions about their futures.

It was a banger of a month for Twitch. The platform (finally) finished distributing both animated and follower emotes to Affiliates. It also launched a promising experiment to welcome new channel viewers. Meanwhile, analytics show the platform cruising comfortably ahead of its competitors.

Into the Data: A dominant display

The numbers don’t lie, January was a massive month for Twitch. While its competitors slowed, Twitch saw peaks in watch time and concurrent viewers. Historically, January has been a strong month for the platform — last year saw similar viewership.

But let’s take a closer look at the analytics:

Will the upswing carry over into February? Historically, that hasn’t been the case. February is typically a down month for all platforms, Twitch included. Last year it saw a 9% reduction in hours watched. Will all that change in 2022? We’ll have to wait and see.

Animated emotes are officially available for all Affiliates and Partners! It’s been more than six months since they were introduced, first to Partners. Since then, Twitch has been slowly rolling animated emotes out to Affiliates. But for many, it’s been a long and frustrating wait.

Well the wait is over! Now, all Affiliates should have access to animated emotes. The number of slots you’ll unlock depends on the Subscriber Points your channel has earned:

New to animated emotes? If so, check out our complete streamer’s guide. Or, load up on animated designs from our emote store here.

Follower emotes were first released to Partners back in June 2021. Since then, Twitch has slowly been releasing them to Affiliate channels. It’s been a long wait, but now every Affiliate is able to assign up to five follower emote slots.

Twitch had once last announcement — follower emotes will soon work on mobile too! Since their release, these emotes haven’t been available for iOS or Android viewers. Now that’s changing. While Twitch hasn’t provided a firm date yet, it sounds like it could be any week now.

Get the full scoop on follower emotes in our dedicated blog.

Twitch also announced a new experiment, chat introductions. This allows new viewers to post a special, highlighted message in chat — saying hello to a new community. Other chatters can quickly and easily identify newcomers in order to welcome them.

This may seem similar to the First Time Chatter feature (released in Fall 2021), but there’s a big difference. First Time Chatter alerts can only be seen by creators and their mods. On the flip side, chat introductions can be seen by anyone, viewers included. Now communities can play a bigger role in welcoming newbies — reducing pressure on creators.

So far, this experiment is only available in a select number of channels. Creators can disable the feature via their Moderation settings under Chat Options.

We’ll see how the feature is received over the coming weeks. Will it boost retention among new viewers? Or will it be taken advantage of by bots, trolls, and hate raiders?

Another month, more radio silence from YouTube developers. For those counting, it’s been four months since the last significant update or feature release. Not only that, the platform’s Head of Gaming is stepping down. Meanwhile, viewer numbers continue to fall, dropping to their lowest in over a year. The lone bright spot is the re-signing of a top creator.

Into the Data: More bad news

By the numbers, it was a brutal month for YouTube. Livestream viewership sunk even further… Surprising, considering one year ago YouTube was hitting all-time highs.

Here’s a closer look at the data:

Can YouTube rally in February? Not if history has anything to say about it. Last year, February brought a 25% decrease in concurrent viewers, month-over-month.

The platform suffered a major blow in mid-January. Ryan Wyatt, YouTube’s Head of Gaming, announced he was leaving the company. After over seven years with Google, “Fwiz” was pursuing a new adventure in the Web3 world.

It’s a major loss for YouTube…and the entire streaming ecosystem. For years, Fwiz has been a respected voice in the industry. He revolutionized YouTube’s live content, leading through innovation and forward-thinking. Fwiz helped bring YouTube Gaming to where it is today — the top challenger for Twitch’s live crown.

Perhaps most of all, his warm and approachable style will be missed. Fwiz was a major presence on Twitter, often replying directly to creators — and unafraid to answer the tough questions. He could relate to creators of all sizes…while his Twitch counterparts often felt distant and disconnected.

As of yet, Wyatt’s successor has not been named. Whoever they are, they’ll have big shoes to fill.

It’s been two years since Valkyrae first brought her content to YouTube Gaming. With her contract expiring, many wondered if Rae was considering a return to Twitch.

In late January, Valkyrae squashed the rumors once and for all. She would be staying on YouTube Gaming, for the next two years at least. Of course, she announced the re-signing in style.

It’s a win for YouTube. For many, Valkyrae is the face of YouTube Gaming. In the past two years, she’s risen to become one of the top streamers in the world — and arguably the top female streamer. To lose Rae would have been a major blow for YouTube, from both a talent and PR standpoint.

It was a quiet but productive month for Facebook. No, there weren’t any headline-grabbing announcements. But the platform secured its top creator and improved one of its most flawed features — clipping. Neither move helped bring in more viewers however, as numbers dropped to their lowest in over a year.

Into the Data: A chilly winter gets chillier

Analytics-wise, it’s been a rough two months for Facebook Gaming. Viewer numbers and watch-time are down big. It’s surprising, considering the platform had a red-hot summer and fall.

Let’s dive deeper into the numbers:

The Mountaineers are here to stay

StoneMountain64 isn’t going anywhere. The creator, one of Facebook Gaming’s most popular, made the announcement in late January. His contract had be re-signed and “StoneMountain” would continue streaming exclusively on Facebook Gaming.

It’s unsurprising news. Since he first joined the platform back in 2017, StoneMountain has seen remarkable success. Over the years he’s become the face of Facebook Gaming, helping guide feature development and onboard new creators. His community, the “Mountaineers”, is one of the platform’s biggest and most loyal.

It’s an easy win for the platform. It would have been shocking to see StoneMountain64 streaming anywhere else.

From Supporters to Subscribers

So long, Supporters. Over the past month, Facebook Gaming has quietly rebranded its monthly subscription. Viewers who subscribe are now called “subscribers”, no longer “supporters”.

The terminology has taken effect across the Facebook ecosystem. Any reference to “supporter” has been replaced across the platform’s support documentation — as well as the Facebook Gaming browser and mobile app.

It’s a small terminology change with a big impact. For years, we’ve complained about the platform’s confusing vocabulary. The terms “subscriber” and “supporter” were often used interchangeably — even by Facebook Gaming itself. This only confused viewers and creators, especially those coming from Twitch. It also made it difficult for Facebook to build a culture around subs, as Twitch has done successfully.

Who knows…if 2021 was the year of Stars on Facebook Gaming, maybe 2022 will be the year of the Subscriber.

Facebook clips are getting some much-needed updates. Indeed, poor clipping has been one of the biggest complaints on the platform. Compared to competitors Twitch and YouTube, Facebook Gaming’s clipping capabilities have lagged well behind.

But all that is starting to change. In its monthly development blog, the platform announced a number of new improvements.

Previously, trimming clips was only possible from desktop. Now, iOS mobile viewers can join in the fun. Luckily, Android users don’t have long to wait either — expect a similar rollout in the next month or two.

Both iOS and Android users can now preview clips before sharing. Now mobile viewers can spot clip errors—or admire their handiwork—earlier. Expect higher-quality, more shareable clips in the near future!

Clip commands aren’t entirely new — Twitch viewers have been doing it for years. However, on Twitch this is normally achieved using chatbots, not directly through the app as on Facebook.

Clip sharing is now easier on both mobile and desktop. Once your clip is ready, you’ll see an updated UI modal that lists all the possible share methods. Of course, the easier clips are to share, the more impressions your content will receive!