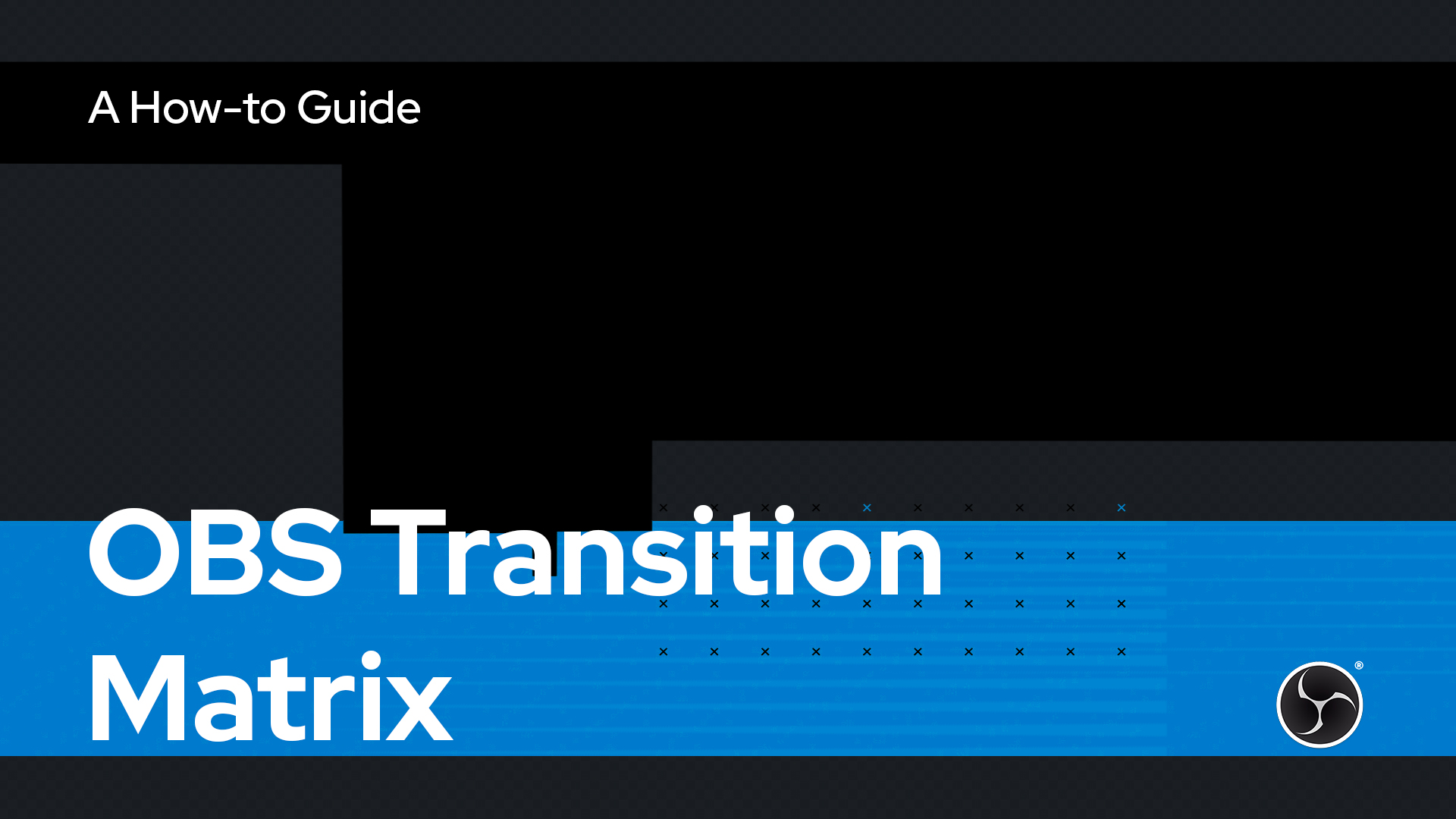 Ever wanted to use multiple stinger transitions on-stream? Wonder how the pros do it without breaking a sweat? Chances are, they’re using the OBS Transition Matrix plugin!

After all, there’s only so many times that you can play the same transition before it begins to feel old and stale. Without unique segues between scenes, your entire broadcast blurs together into one unremarkable (and forgettable) mess. Eventually, your viewers will grow bored and tune out.

Top streamers counter this by using a wide variety of stinger transitions. They have a collection of animations to choose from, each pre-programmed to fire with a single click. Recognizable visual cues segue into each scene, guiding viewers forward. Best of all, their audience is kept anticipating what’s next – and on the edge of its seat.

Want to be like them? Learn how to use one of our favorite OBS plugins, the Transition Matrix.

What is OBS Transition Matrix?

Transition Matrix was released by creator ‘Shaolin’ back in January of 2020, after a one-year beta. It is a free OBS plugin that allows you to set up unique stinger transitions between your scenes. If you have multiple transitions, you can assign certain ones to play every time you switch between two scenes. It’s like having a custom transition for each of your main scene progressions.

That means you’re not stuck using only your default OBS transition. It also means you don’t need to manually fire each animation one-by-one; once you’ve established a rule, the transitions automatically play. Consider it the vanilla OBS Scene Transition dock, but on steroids.

Say you want Transition A to play every time you switch from your Intermission scene to your Gameplay scene:

But you also want Transition B to fire when you switch from Gameplay to your Fullscreen scene:

And maybe you want Transition C to play for your Gameplay-to-Intermission scene progression:

All of this is possible with OBS Transition Maker. Let’s show you how.

You’ll need to download and install the OBS plugin to get started (it’s free). If you’ve used OBS plugins before, the process should be very similar. If this is your first time, don’t worry; we’ll show the ropes quickly below.

First, follow the link above then click the white ‘Go to download’ button in the top-right corner. This will bring you to the plugin’s GitHub page. Under the ‘Assets’ table, select the .zip file that matches your operating system (OS):

Once you’ve unzipped the files, locate your OBS Studio installation folder. By default, it should be under the directory ‘C:\Program Files\OBS-Studio’ (if not, you may have changed the location when you originally installed OBS, so keep looking). Open the folder then select ‘obs-plugins’. Choose ‘64-bit’ (if you’re using 32-bit OBS you’ll need to upgrade). The next window shows all your installed plugins.

Now return to your newly-unzipped Transition Matrix files. Open the ‘obs-plugins’ folder then choose ‘64bit’. Click the file ‘obs-transition-matrix.dll’ and drag it into the open ‘64-bit’ folder alongside your other installed OBS plugins.

And just like that, your OBS Transition Matrix install is complete! No additional setup required. You’re ready to open up OBS Studio and give it a first test run.

How to Use Transition Matrix for OBS

Once you’ve launched OBS Studio, select ‘Tools’ from the top menu bar. You should now see an option for ‘OBSTransitionMatrix’. Select it.

The next window is where all the magic happens. The grid layout may seem overwhelming at first, especially if you have a lot of scenes in your OBS. But once you get comfortable with the mechanics, you’ll find it’s actually quite simple and user-intuitive.

The table displays every possible scene progression for your stream. To select a custom transition for two scenes, simply start on the left with your origin scene. Then follow the row across until you intersect with the column of your destination scene (shown on top). Right click within the intersecting cell, then from the dropdown menu select the transition you would like to play.

Once finished, the transition you selected will play every time you switch from that particular origin scene to the destination scene you selected.

Let’s take an example. Say you wanted a wormhole transition to play every time you swap from your Gameplay scene to your Intermission scene. Here’s how you would set that up within Transition Matrix:

It’s as simple as that! Now you can repeat the same process for other scene progressions if you’d like. You can have an army of transitions firing automatically between scenes – with little to no effort on your part.

Obviously the process gets a bit more complicated the more scenes you’re using. As you add scenes your table size will grow, and your scene combinations will multiply. Luckily you don’t have to repeat the process more than once; after initial setup, your transitions will be saved for future use.

Every table will have a number of blank cells running diagonally towards the bottom-right corner. These indicate impossible combinations; for example, you cannot transition from your Starting scene to your Starting scene. Best to ignore these.

When nothing is defined for a particular table cell, you’ll see the cell defaults to ‘OBSTransition’ or ‘None’. This means the transition that plays will be whatever you have selected in the dropdown of the main OBS ‘Scene Transition’ dock (outlined in red below). Without any specific guidance from the Transition Matrix, your default transition will play for that particular scene progression. Make sense?

Once you right-click in a cell you’ll notice a timing input, measured in milliseconds (it defaults to 300ms). If you’re adding a stinger transition, you can avoid this field for now (any changes you make to timing here won’t affect stingers). However, if you’re using a different type of OBS transition – like a ‘Cut’ or ‘Fade’ – you can fine-tune timing until you have a seamless switch-over.

There’s one final trick that will make your life easier if you have lots of scenes to manage. Pay attention to the topmost row, which will either be labeled ‘OBSTransitionMaker.Any’ or just ‘Any’. From this row, you can make broad changes to any one scene destination, rather than having to edit each cell in a column individually. Instead, you can assign a particular transition to play every time you switch from ANY scene to that one destination scene.

For example, let’s say you want a comet transition to play every time you switch to your Stream Ending scene (no matter which scene you’re switching from). You’d simply go to the top ‘Any’ row, move right to the ‘Stream Ending’ column, then right click to assign the comet transition. Now you’ll always see the comet stinger when moving to your ending screen. Neat, huh?

For such a simple tool, the OBS Transition Matrix is revolutionizing broadcasts around the world. The days of one boring transition are long gone. Now you can deploy an endless amount of stingers, which makes for a more enjoyable and watchable stream. And that means higher view counts and chat engagement. Seriously, it’s one of our favorite OBS tricks out there — along with using image masks to change your webcam shape!

Once you’ve mastered the plugin, the fun part really begins. Now you can begin expanding your transition collection, introducing new animations, speeds and art styles. Not sure where to start? Visit our Stream Store to shop premium stingers, including 10 FREE designs you can upload to your OBS today.

Or, if you want to build your own custom transitions, check out our Stinger Transition Maker. You can upload your brand logo and colors, then choose from our library of available animations. In a matter of minutes you’ll be making custom stingers for free – or at a tiny fraction of the cost of custom design. Seriously, give it a go; there’s a reason it was our most popular tool of 2020.

All that’s left is to get started. What are you waiting for? Go unleash transition mayhem.