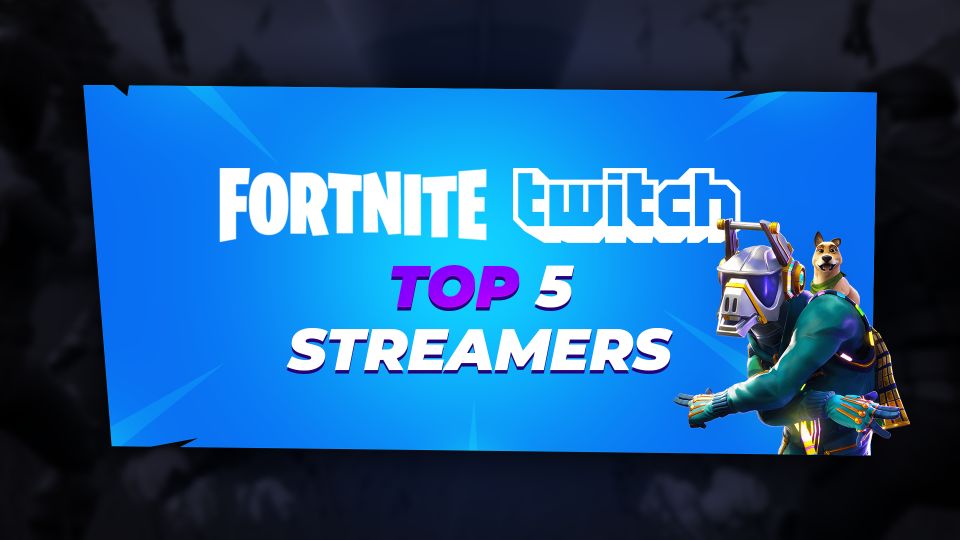 In the past year, we’ve seen Fortnite change the gaming industry as no game has before. All across Twitch and beyond, we hear names like Dakotaz and Ninja and so many more that have stood the test of time as some of the best Fortnite streamers ever. These two are definitely at the top of our top Fortnite streamers list, but there are others worthy of watching. Top Fornite streamers have taken Twitch branding to new levels.

Here’s our rundown of the five best Twitch Fortnite streamers.

Dakotaz is not only our elected best Fortnite streamer, but he’s also a genuine guy who really cares about his fans. Despite having won 1500 and counting games, he remains if not the most influential presence on Twitch, then certainly the most mysterious one.

And his refusal to use a face-cam doesn’t help much either, as myriads of Dakotaz followers keep on wondering who he is. In case Dakotaz isn’t number one on your top streamers list, let us explain why he’s at the top of ours.

His technical prowess aside, though it is nothing if not superb, Dakotaz really pays attention to other players and his followers. If you kill him and he goes on a rant, he apologizes. If you subscribe to his channel, he calls you out by name on stream.

Dakotaz is a brilliant player who remains incredibly humble, and we love him for that.

Where Dakotazis smart and humble, Ninja is quick and witty.

This young man is currently the most popular streamer on Twitch, and deservedly so. His qualities as a Fortnite player can be overshadowed only by his charming personality – even though he’s amassed a large sum of money over the years, many of his checks have gone to charity.

And who can forget the time he hosted a celebrity-studded stream with NFL player Juju Smith-Schuster and rappers Travis Scott and Drake? This little marketing experiment has earned him the most views on an individual stream on Twitch, which remains an unbeaten record to date.

If you want to learn how to set up a death trap, look no further than SypherPK. It’s a purely educational experience, we promise you that. SypherPK’s Fortnite knowledge and skills have been described as unparalleled on numerous occasions, and for a good reason.

When it comes to crafting and building, this guy puts on a master class. There’s a good chance that you can become a better player by simply watching SypherPK gather information on his competitors.

So, tune in and take notes. Because his streams are a treat to watch and because they serve as super-advanced Fortnite tutorials, SypherPK will always have a special place on our lists of the best Twitch streamers.

If you haven’t heard of TSM_Myth, you’ve been living under a rock the past year.

Now the third-most-followed streamer on Twitch, Myth has climbed the ranks at record-breaking pace, much thanks to his insane Fortnite playmaking ability. Prior to the launch of Epic’s Battle Royale, Myth was largely an unknown streamer. That would change quickly, as he repeatedly bested some of the biggest names in esports gaming and became the top PC Fortnite player at the close of 2017. Soon after, he was recruited by top esports organization TSM.

Today, TSM_Myth is recognized as one of the best – if not THE best – builders on the scene, outmaneuvering his opponents with insanely complex strategies. As the youngest of the five streamers on our list (he’s only 19), Myth brings a confidence and independence that is refreshing in the Twitch community. Take a few tips from TSM_Myth and you’ll be raking in the Dubs in no time.

Mixing gaming with comedy in a rare, yet effortless way, DrLupo delivers one of the most unique streaming experiences on Twitch. Come to think of it, his channel is actually a good resource for learning the basics of Twitch branding, considering how seamlessly he interacts with his followers.

If you’re into goofing aroundwhile playing Fortnite, DrLupo is your guy. Prepare to laugh while you’re chatting with him, but also watch closely as he works his magic. He’s got so much to offer both as a jester and as a gamer, which makes his channel one of the best hanging spots on Twitch.

Feel like we’ve missed someone? Check out these five Fortnite streamers and come back to us with your thoughts and suggestions. If you’re looking to join these top Fortnite streamers, get your branding started today with Visuals By Impulse custom Twitch overlays and panels!